The International Stunt School is recognized and licensed by the State of Washington and the Workforce Training & Education Coordinating Board as a legitimate professional stunt training facility that adheres to those rules set forth for Vocational Schools: (RCW) 28C.10 and (WAC) 490-105.

The International Stunt School, presented by the United Stuntmen's Association in conjunction with On Edge Productions, Inc., is regarded by many stunt professionals in the industry as the most thorough and all-encompassing stunt training program in North America, with a number of the participants coming from the international community. Founded in 1992, we remain the only stunt school that is licensed and registered as a professional vocational facility in North America.

Our school’s successful 27-year history speaks for itself: we provide the best training by the best instructors and our graduates get work in the stunt industry!

The excellence of our program is based in our focus to provide each student with the skills and knowledge to leave the school and work professionally at a high standard. In order to achieve this, our greatest emphasis is put on our teaching staff. We have 10 instructors that have been with us for several years and have been carefully selected not only for their skill set but also for their ability to teach their area of expertise with unmatched quality. All are working stunt coordinators and stunt performers and, more importantly, all of them have years of invaluable teaching experience. It is not enough to be good at a given skill; they must be able to effectively pass that skill on to the student.

Safety is paramount in our profession and it permeates every lesson we teach. How to use the safest methods to employ the most dramatically effective movement is discussed with every technique. Each student is constantly being assessed and advised by each instructor and allowed to progress as per their current skill level. The state of Washington sets very high standards for their vocational schools and we are held accountable to strict education policies and a code of conduct and as dictated by the Workforce Training and Education Coordinating Board, whose job it is to oversee not only the quality of instruction but the safety of all vocational schools registered in the state of Washington.

Our curriculum is constantly being updated and improved to reflect current trends and techniques in the industry and adequate time is allotted to impart all the information. We find it impossible to thoroughly teach the required disciplines in less than 3 to 4 weeks because taking less time would sacrifice both the quality and the quantity of instruction. This is something we find unacceptable. For those students who want to maximize their abilities and enter the stunt profession with the necessary credentials the best way is take the time necessary to train in the right environment with the right people. As a result our students are entering the stunt arena with a diverse and usable skill set, ready to create a viable product for any stunt coordinator that hires them.

Our graduates are working all over the world in many arenas: film, television, the growing web media sector, and in the motion-capture industry for both film and videogames. Some get work at live stunt shows in various theme parks and on tour, such as Marvel Universe Live (Feld Entertainment), Disney, Six-Flags, Universal Studios, and Mirage Entertainment. Many of these shows seek out our graduates when hiring for stunt positions, both domestically and in other countries such as China, Japan, and Germany. See the testimonials from previous students below.

Countries that have been represented by the various participants over the years include:

"It was a truly amazing 3 weeks. You really do have the top training program in the country and it is challenging to grasp the enormity of the knowledge passed on to me."

"I have already been asked to coordinate a small "indie" slasher film in January. Nothing too extravagant, just a small fight, high fall, and stair fall. I can't thank you enough for all you have done for me and I truly will try and make you proud."

"Man, I miss you guys. Well, for those who didn't know that I was cast on two episodes of a Japanese TV show a couple of weeks after I got home from training. And the BIG news is that I just got cast in the upcoming film "The Pursuit of Happiness" starring Will Smith. I owe the stunt training a lot!"

"I would like to thank you on a personal note, for one of the greatest times of my life. The amount of knowledge and fun I gained from schooling with people from all over the world was in itself, worth it to me, not to mention the instruction from the greatest stunt school staff in the world!"

"I decided to move to California just about 2 years ago today to pursue stunts. I got my sag card in about 5 months and got my first stunt job soon after. Since then I have made a living doing what I love. Anyways, I just thought you deserved a thank you for getting me interested in the entertainment industry. You taught me a whole lot and I have taken it to heart."

"I've did what you've told me the last day of the workshop, I went home to Denmark and started my own stunt firm! I have gathered some of the best new stunt performers in the country...many of them you know, you trained them! We have been working on several projects. We have been staying very busy. Thanks again."

"Just a quick one to say thank you for everything. Stunt School was everything I imagined and beyond. It has made me more determined about entering the business. I am interested in your wire workshop and look forward to seeing you in April."

"Been so busy ever since I got back that I haven't had a chance to thank you for the incredible training. There is definitely a glow about me now when I walk into any industry related environment. I learned a great deal, had a blast, and miss the incredible people I had the fortunate opportunity to train with. You're the best."

"It was an incredible 3 weeks of learning. What I liked most other than the actual physicality of it, was the frankness you brought to us all. I am not someone who likes a lot of fluff. Just tell it like it is and get to the point - and you did just that! Your school ran like clockwork and your staff and assistants were superb."

"I had a great time at the stunt school and I wanted to thank you and the other instructors for making it happen. I have to say that I don't know where else I would ever have found the instructions I found at your school. Hopefully, someday I will be in a similar position to that former student of yours when I am asked who taught me how to punch like that and I too can simply say.... Dave Boushey taught me."

"I can't begin to explain how much your wisdom and encouragement impacted me as a performer as well as a person. You have provided me with so many tools that will help me to build my life and my career in this industry. I am forever grateful."

"Thanks a lot for the workshop, sometimes it was really arduous, but for the most part it was great fun, and I genuinely learnt so much from you guys in the three weeks, it's amazing! You have a great bunch of instructors."

"I wanted to take a moment to thank you again for the fantastic training and experience of the International Stunt School. I have never attended training that was packed with so much information and was so much fun at the same time."

"It was everything I hoped for and more. Your training was one of the best times of my life and has given me the tools that I needed to help accomplish my goals."

"I just wanted to thank you for everything. Not just the training, but for convincing me to get my big dumb ass up there. I could not have asked for a more professional, tightly run learning environment. The most important thing you did for me was make me well aware of my strengths, and weaknesses."

"It is my pleasure to inform you of my first official stunt. It was incredible, I really left the crew scared for me after they watched me do a forward roll over the stairs. Thank you very much for what was covered in the course. The amount of information you gave us re: angles, technique, and choreography came in VERY handy. You made me look very good."

"Thanks to you I am now a professional stunt performer. Your school was something I could not hope to find in Canada. I cannot thank you enough for your guidance and professionalism. I am truly indebted to you."

"I just finished doing Charlie’s Angels. My last few days were spent riding outside and hanging beneath a helicopter! You gave me a huge break at the beginning. I will never forget that. Stunts are going well for me down here in LA."

"Hey Maestro, my project is going great, we just went into production last week and will stay in production for a year and a half. Oh well, guess I'm stuck, I'm a filmmaker and it's all your fault."

"I did it! I have my first stunt gig coming up. I was sent on an interview for a 1950's, New York street gang punk. There were about 25 other guys there interviewing with a six move fight they gave us. I did the fight and kicked ass! You're the man who trained me Dave. I just wanted to inform you on my success."

"Back in 1995 I attended your stunt training. I moved to the UK in the fall of 1996, and have been there ever since. I work as a freelance historical/action consultant, mainly on documentaries and educational programs. Last year's projects included: Warhorse and Arms in Action, for the History Channel, a film called Lost Kingdom and Secrets of the Lost Empires for the BBC."

"I have just earned my SAG card! I had to jump a jet ski over a camera man for a national commercial for Texas tourism. I have also just been approached by a man who is in the process of advertising a world record for the longest fire burn on a jet ski. He wants me to do it, I can't believe it, and I have you and your school to thank for getting me started." 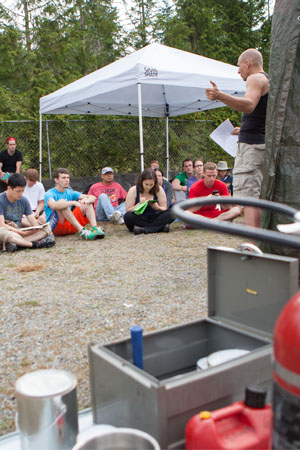 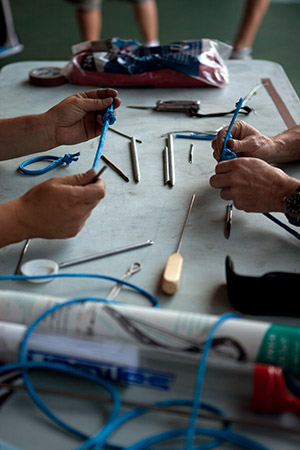